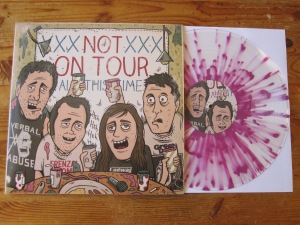 Don’t make Batman angry. You know you want that pretty LP right above and there’s plenty of other cool stuff too. Have you even heard Caddy? Do you like powerpop? or The Beach Boys? or ridiculously amazing tunes? Then do yourself a favor and get Caddy’s Electric Hero immediately.

We love music as much as you do and it’s always better to get records on the cheap. Just head over to our store and enter code: batman (like the superhero you are) to save 30% off absolutely anything and everything. And don’t forget to check out our disto for lots of cool cd’s and vinyl from other great labels.

Hopefully, some of our European friends were able to see one of my favorite bands on tour this summer. If you were lucky, I’m sure the gang put on one hell of a show for you.

If you haven’t picked up Not On Tour’s self-titled debut album on vinyl, which also includes their second EP on the B, this is your last chance. We only have a few copies left. And they’re the super rare (like only 20 in existence rare!) white w/ green marble variant. But have no fear, we have plenty of the cool CD version that comes with a mini poster and both vinyl versions of All This Time still available. Well, at least for now.

p.s. I’ve been selling comics on ebay for awhile now and was thinking of trying it out in the diner junkie store. Batman and punk rock make a good pairing? Let me know if that’s something you guys would be into.